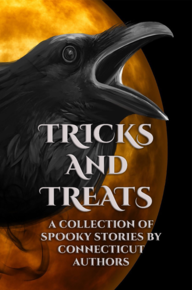 John has two short stories -- "Just Cause" and "Blood Relations" -- featured in the award-winning anthology Tricks and Treats, out now from Books & Boos Press.

"'Just Cause' is the lead story and it reads like a Marcia Clark novel. It's a tight crime piece about a convict accused of killing his wife who escapes on Halloween. Ruh-Roh. Valeri's second story in the collection, 'Blood Relations,' has a cinematic vibe that, at times, gave me the feel of watching a horror movie. Both stories have strong dialog that effortlessly moves the action along. I'm already a fan of Valeri's reviews and author interviews and will now follow his fiction, as well." -- Wildmoo Books

"'Blood Relations' by John Valeri is about the queen of the Fall Ball being brutally murdered on Halloween, a year later the identity of the killer is still unknown. The suicide of a young man seems to point the finger at him but is it the truth? Did he really murder Amanda? It’s a longer story but well worth the read, it has a cinematic feel and plays out in the mind like a good slasher flick." -- This Is Horror (UK)